BLOGGER COMMENTS:   This is ridiculous.  John puts in perspective.  But it's still stupid.

What happened since Mike Hubbard was sentenced? 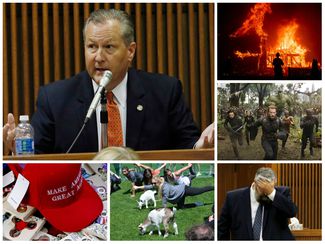 This is an opinion column.
Three years, five months and ten days. A long time.
That’s how long it has been since former Alabama House Speaker Mike Hubbard – the man we used to call the most powerful politician in Alabama and the guy who’s still treated like it -- was sentenced to four years in prison for 12 felony violations of the state ethics laws.
A lot has happened since July 8, 2016.
Some 30 million acres of land in the U.S. has gone up in flames in wildfires. Poof. That’s almost as big as the whole state of Mississippi.
Donald Trump was elected president. And Hillary Clinton wasn’t. A lot has happened. And a lot hasn’t.
Mike Hubbard hasn’t gone to jail, as the Alabama Supreme Court ponders the merits of his appeal.
Some folks, like one I see in the mirror every day, think Alabama’s high court is simply searching for a way to spin it to make setting him free sound like justice instead of preferential treatment. Because time drags on. And a lot has happened.
Sixty-five people across America were put to death for their crimes. Tom Brady has thrown for 7.1 miles since Mike Hubbard was sentenced. Fidget spinners came and blessedly went. The Alabama Democratic Party tweeted something about politics.
The national debt has grown by more than $3 trillion, which comes to about $13,000 per taxpayer. A trillion is a hard number to get your head around for a lot of reasons. One is that there’s only about $1.5 trillion in U.S. circulation at any given time. It’s a lot.
Gov. Robert Bentley pleaded guilty to two misdemeanors and resigned from office after a very odd relationship with a staff member. Matt Hart, the prosecutor who became the bane of Hubbard’s existence and took Bentley’s plea, became a defense lawyer.
Roy Moore had to leave the Supreme Court for a second time, after a suspension by the court of the judiciary. He ran for the U.S. Senate and lost to Doug Jones. Now they are both running again, along with the former attorney general of the United States and the former football coach who warned Alabama fans to “fear the thumb.” A lot has happened.
Former Birmingham Mayor Larry Langford served eight years and eight months of his bribery conviction, and was released just in time for him to die near his family.
Alabama won a national championship in football and lost two other cracks at it. Jalen Hurts left Alabama, and became a Heisman finalist. Tua Tagovailoa likely played out his entire college career in the time since Hubbard was sentenced. Auburn went to the Final Four in basketball.
Gene Wilder died, and Arnold Palmer. So did Tom Petty and Mary Tyler Moore and Chuck Berry. That list goes on and on. Kids who started college that fall are one semester from graduation. If they went to class.
In 2016 everybody had headphones attached to their iPhones. Now they don’t. Babies born during Mike Hubbard’s trial can now walk, and run, and talk, and operate YouTube. Goat yoga – inexplicably -- became a thing.
Toys R Us filed for bankruptcy. And so did Radio Shack. And Sears and Claire’s and Brookstone and on and on.
Half the people died – spoiler alert -- in Avengers: Infinity War, and almost all of them came back – spoiler alert -- in Avengers: Endgame. Between the two they made $4.7 billion at the box office. Which is just a little more than the amount of the Jefferson County Bankruptcy in 2013 that was aided and abetted by corruption. A lot has happened since Mike Hubbard was sentenced.
And one thing hasn’t.
Mike Hubbard has not gone to jail.