BLOGGER COMMENTS:  An 18-year-old thug is about to find out that killing a cop is Capital Murder.  IMO, this one will end up on Death Row.  Meanwhile, the outpouring of grief in this mostly poor county is genuine and deserved.  RIP, Sheriff Williams.

Lowndes County Sheriff John Williams became the fifth Alabama law enforcement officer to be killed by gunfire in the line of duty this year. 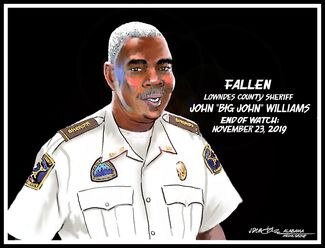 From the Al.com story: “Williams, affectionately known as “Big John” and described as a pillar in his profession and in the community where he grew up and served, was shot after he responded to a call at a convenience store in Hayneville Saturday night.”

An 18-year-old charged in the murder of Lowndes County Sheriff John Williams made his initial court appearance Monday morning in Lowndes District Court in Hayneville.
William Chase Johnson, of Montgomery, entered the courtroom in black and white striped jail clothes flanked by two state troopers.
Crenshaw County District Judge Tom Sport handled the proceeding, which lasted only a few minutes.
Sport advised Johnson of the murder charge and asked Johnson if he would hire an attorney or if he needed the court to appoint one. Johnson shook his head, indicating he did not know.
Sport ordered Johnson held without bond. Sport said he would schedule a preliminary hearing in the case after Johnson has a lawyer.
Johnson was led out of the courthouse after the hearing. He has been held in the Elmore County jail.
Williams was shot to death outside the QV convenience store in Hayneville about 8 p.m. Saturday. Johnson surrendered to authorities at the crime scene a few hours later, ending an hours-long manhunt.
The State Bureau of Investigation is handling the case and has not released any information about the circumstances of the shooting.
Sport, a Crenshaw County District Judge, was appointed to preside over the case after Lowndes County District Judge Adrian Johnson recused himself, court records show. Also on Monday, Sport issued a gag order instructing Johnson, his attorneys, and prosecutors not to talk to the media.