Is This a Big Mistake? UPDATE 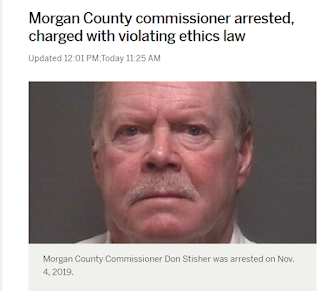 Don Stisher, a longtime Morgan County commissioner, has been indicted on a felony charge of violating Alabama’s ethics law, the authorities said.
Stisher, 63, was released on his own recognizance after turning himself in to the Morgan County jail this morning. Attempts to reach Stisher for comment weren’t immediately successful.
Stisher is charged with receiving gifts as a public official, a Class C felony that’s punishable by up to 10 years in prison, according to the sheriff’s office. He’s charged under a statute that says public officials can’t convert campaign funds to personal use, according to the authorities.
The Alabama Attorney General’s Office didn’t immediately respond to a request for comment.
Stisher’s case was sent to the AG’s office last year after the Alabama Ethics Commission found there was probable cause that the commissioner had violated the law.
Stisher served on the Morgan County commissioner from 1996-2004. He returned to the commission in 2008 and has served District 3 since then. The district is in southern Morgan County.
Morgan County Commission Chairman Ray Long said Stisher hasn’t notified the commission about the case.
This story will be updated.

News outlets report state prosecutors initially charged Morgan County District 3 Commissioner Don Stisher with a felony for violating the state ethics law. A Morgan County grand jury indicted Stisher last month, but his charge was reduced to a misdemeanor because he says it wasn't intentional.
Stisher's attorney acknowledged he accepted the donations and deposited the money into his personal account rather than his 2016 campaign account. Records show Stisher took $1,000 each from two donors in 2015. He called the deposits an "oversight."
On Monday he was fined $2,000 and given a year of probation.
Al.com reports he said he has qualified to run for reelection in 2020.