Where is the rest of the story 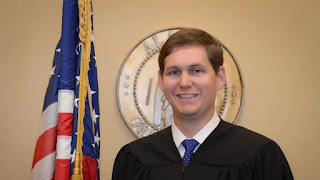 
A north Alabama judge is under investigation, state officials confirmed today.
Doug Patterson, a Limestone County district judge, is the subject of the investigation, according to the Alabama Administrative Office of Courts. A spokesman for the office declined to comment on the nature of the case or provide further information.
Attempts to reach Patterson for comment weren’t successful on Thursday.
Mike Lewis, a spokesman for Alabama Attorney General Steve Marshall, said his office “cannot confirm or deny the existence of any investigation.”Roman Shaul, General Counsel for the Alabama State Bar, said he can’t comment on whether that organization is investigating Patterson.
Limestone County Circuit Judge Robert Baker, the local presiding judge, couldn’t immediately be reached for comment.
Patterson, 37, first became a district judge in 2016. He was appointed by then-Gov. Robert Bentley to complete the term of retiring Judge Jeanne Anderson. Patterson was later elected and took office for a full term in 2017.
Before becoming a judge, Patterson was an attorney. He was born in Athens and attended the local high school. He attended Athens State University before going on to the Cumberland School of Law at Samford University, according to his bio on the county website.