Blogger Comments:  We have posted portions of a must-read article from AL.com.  Please read the entire article at URL below.

There are some very good reasons why Alabama or any county in Alabama should not be designated as a Sanctuary City.  It isn't the good people that we worry about; it is the bad.  Unfortunately, we already have a lot of the bad.  We should work with the federal government in weeding out the bad. 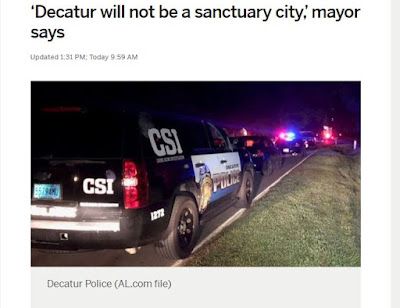 Updated Monday at 1:31 p.m.: City officials in Decatur are working to “clarify” the immigration policy instituted by the police chief last week and protested Sunday in a Facebook post by Mayor Tab Bowling.
Bowling has also apparently deleted his Facebook post in which he spoke out against the policy initiated by Chief Nate Allen.
In a new post Monday afternoon on the mayor’s Facebook page, a press release from the city of Decatur said that the mayor’s office, police department and the legal department are now working together to reshape the policy.
The full post from the city of Decatur statement:
"In lieu of any press conferences and in response to concerns voiced regarding General Order 426.0 (Immigration Procedures), the mayor’s office, legal department and police department are working to clarify the policy to correct some misunderstandings or vagueness and to ensure compliance with state and federal requirements.
“The changes should be made quickly and will be released as soon as completed.
“It is our desire in the city to fully comply with the letter and spirit of federal and state laws as we work together to protect the people of the city of Decatur.”Original story: Decatur’s mayor and police department are at odds over a new immigration policy introduced last week by the police chief.
Mayor Tab Bowling posted on Facebook his strong objection to the new policy, saying “Decatur will not be a sanctuary city” for those in the country without legal immigration status. And the police department on Monday stood by its new policy in its own Facebook post.
The dispute has captured the attention of Mo Brooks, an immigration hawk and north Alabama congressman whose district include Decatur. Brooks on Monday tweeted support for Bowling. 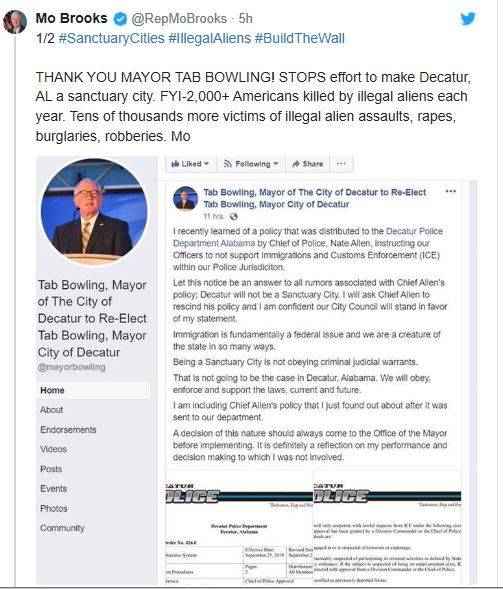 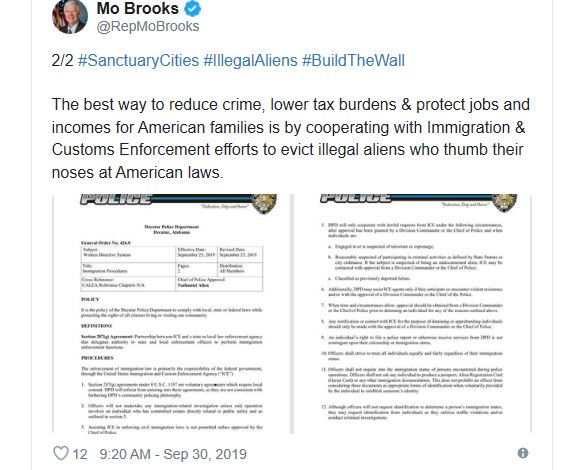 Bowling said in his Facebook post that he would ask Police Chief Nate Allen to rescind the policy rolled out on Sept. 25. Based on the police department’s Facebook post Monday, that’s not happening.
“We’re proud of the service we provide to our residents," Allen said in the police Facebook post. “We’re in the business of saving lives, helping the hurt, and comforting the scared. We’ll leave the governing decisions to those best versed to make them.”
The police department post said it was following guidelines provided by Commission on Accreditation for Law Enforcement Agencies (CALEA).
The policy, which was included in the mayor’s Facebook post, said Decatur police will “refrain” from entering into “voluntary agreements” with Immigrations and Customs Enforcement (ICE) because they are “not consistent with furthering DPD’s community policing philosophy.”
"Officers will not undertake any immigration-related investigation unless said operation involves an individual who has committed crimes directly related to public safety or as outlined in Section 5."
Posted by morgancountywhistleblower at 9/30/2019 03:03:00 PM