The truth about Alabama austerity 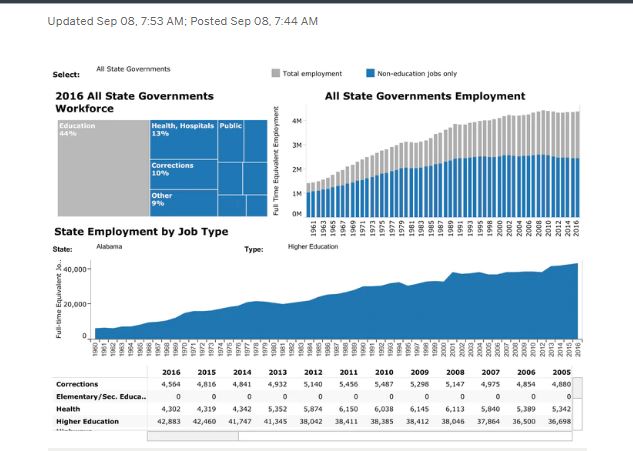 Alabama officials made a big deal of cutting public employment. But it is often a shell game. (Governing Magazine)

This is an opinion column.
You know what Alabama is like?
It’s like the dad who catches his kid with a dime bag of dope. You know, the one who screams and hollers and scolds and preaches and confiscates the contraband.
And then goes out back and smokes it.
That’s us. Indignant. Higher and mightier. Do as we say, children. Not as you learn we do when we get caught. I can still hear disgraced and disgraceful former House Speaker Mike Hubbard going on about fiscal responsibility and the hard choices in cutting back the state payroll. I can still see disgraced former Gov. Robert Bentley, in his first State of the State address, biting his lip and telling how all state agencies had to be cut. That bandwagon got big.
Because public employees cost taxpayer money!
Because there are no free rides!
Because government is not an employment agency!
Because it was a brand new day in the state then, with a GOP Handshake with Alabama that promised honesty and accountability and frugality and economy. So public employees were scolded and grounded and sent to their rooms without their supper.
While mom and dad, over in the State House and the Capital, snuck out back and fired up a number.
A bunch of numbers, really.
Governing Magazine – rest its hard-working soul – in its final issue last month analyzed data from the Census Bureau’s Annual Survey of Public Employment and Payroll and calculated job changes for public workers across America, not including teachers.Alabama, despite the villainization of public employees by villainous politicians, was fifth overall in public employees – not counting D.C. -- with 295 per 10,000 residents in 2016. That’s higher than California and Jersey and, well, everybody but Wyoming and Alaska and New York and thank-God-for-Mississippi.
And the number is growing. Alabama was 10th – again not counting D.C. – in public employee growth between 2013 and 2016, when it increased in state and local public jobs by 7.2 percent.
Fire one up, Alabama.
Of course, the real burning issue is where these jobs are, and where they are not.
Because since Bentley’s first State of the State in 2011, the number of full time public employees in a lot of areas really has fallen, according to these Governing numbers.
Corrections employees, for instance, were down 16 percent from 2011 to 2016. Not like we’re having any trouble there.Health workers employed by state and local governments were down 14 percent, hospital workers were down, even highway workers were down a bit. And public workers in the field of natural resource were down 14 percent. Because who needs them, except for fish and the rest of us?
Park workers were down, even police are down, perhaps because of the Alabama Law Enforcement Agency consolidation, and public welfare workers were down 3 percent.
So where is the increase? Where are mom and dad hiding their dope?
At college, of course.
Because in the midst of all the cutbacks and the pain, higher education workers grew 11.6 percent from 2011 to 2016. They grew by 4,472 workers – more than all the public welfare workers employed in the state – in that five-year period.
I’m not suggesting we cut jobs at state colleges and universities, or that the payroll comes out of the same pot -- which it doesn’t, because students largely pay the freight there. Just that we be real when we talk about public jobs and austerity.
If we want the state to run well, we need people to run it well. So next time a disgraceful politician promises to balance the budget on the backs of park workers or environmental budgets or health employees, remember it’s a shell game. And one other thing.
Somebody’s out back smoking dope.
John Archibald, a Pulitzer Prize winner, is a columnist for Reckon by AL.com. His column appears in The Birmingham News, the Huntsville Times, the Mobile Register and AL.com. Write him at jarchibald@al.com.
Posted by morgancountywhistleblower at 9/09/2019 09:03:00 AM