Blogger Comments: Folks, Blakely's arrest couldn't happen to a better sleazeball. For years the stories about Blakely and some of his "friends," a previous sheriff from Morgan County,  thought they ruled and controlled Limestone and Morgan County.  There was a do as I say not as I do concept between these slimeballs.  They got away with a lot over the years but all good things come to an end.  Should someone go back and check how many inmate food funds Blakely received over the years the amount would be staggering.

It is our hope that there is more to come on Blakely as well as past and present sheriffs that choose to run their offices through corruption, theft, intimidation, and arrogance.

We have said all along it doesn't matter if you are a Democrat or a Republican.  Dirty is as dirty does no matter what your political affiliation is. 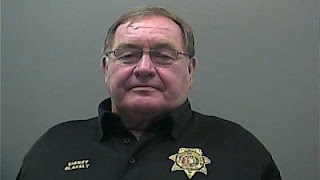 The Limestone County Sheriff’s Office plans to hold a news conference soon. We are in place and ready for when it begins. Please be patient with us while we wait for it to start.
LIMESTONE COUNTY, Ala.- Limestone County Sheriff Mike Blakely was booked into his own jail Thursday morning after being indicted on 13 counts of theft and ethics charges.
The 13 charges cover conduct over multiple years, according to Marshall.
Specifically, the first four counts charge Blakely with four separate thefts from his campaign account that total $11,000. Counts five through 10 charge Blakely with theft or ethics charges stemming from his illegally taking money from Limestone County funds, including from the Sheriff’s Law Enforcement Fund. Count 11 charges Blakely with soliciting a $1,000 wire transfer from a subordinate other than in the ordinary course of business.  Finally, counts 12 and 13 charge Blakely with using his official position or office to acquire interest-free loans. Specifically, count 12 charges Blakely with using his official position or office to obtain interest-free loans in the form of a $50,000 cashier’s check and/or a $22,189.68 credit.  Count 13 charges Blakely with using his official position or office to obtain interest-free loans by taking money from a safe that was used to store the Limestone County inmates’ personal funds.
“Public officials are entrusted to perform their duties honestly and above reproach,” said Attorney General Marshall.  “When that bond of trust is broken, our society suffers undue harm. My office—working with our federal and state partners—is committed to ensuring that the violators of the public trust be held accountable under the law. I would like to thank the Federal Bureau of Investigation for its investigative assistance in this case. Anyone with information regarding corrupt practices by public officials is encouraged to contact the Alabama Attorney General’s Office at reportcorruption@ago.state.al.us.”
“While the overwhelming majority of public officials serve honorably, those who corrupt the operations of government rob their communities—their friends and neighbors—of the fundamental right to honest government, and we must insist on absolute honesty, integrity and trustworthiness from everyone,” said FBI Birmingham Special Agent in Charge (SAC) Johnnie Sharp, Jr.  “I want the citizens of north Alabama to know that if they have information about potential wrongdoing by a public official or law enforcement officer, the FBI wants to hear from you. If you have information, call my office’s Public Corruption Tip Line at (844) 404-TIPS, share what you know, and join in the fight against corruption.”
The case is being prosecuted by the Attorney General’s Special Prosecutions Division. No further information about the investigation or about Blakely’s alleged crimes other than that stated in the indictment may be released at this time. In October 2018, the director of the Alabama Ethics Commission confirmed to WHNT News 19 that Blakely was being investigated for a possible ethics violation.
Back Story. The ethics commission voted 4-0 to send the ethics allegations against Blakely to the Alabama Attorney General’s Office.
Back in 2018, Sheriff Blakely responded to our request for a comment saying he “respectfully disagrees” with the ethics commission and believes he will be vindicated.
Blakely has served as the Limestone County Sheriff for 36 years. He was sworn in for his first term in 1983, which is the same year Blakely established the Limestone Sheriff’s Rodeo. The fundraiser has raised over a half-million dollars for the purchase of equipment for the sheriff’s office, according to the Limestone County Sheriff’s Office website. The website biography for Blakely also states that in 2002 he was honored by the Boys and Girls Club of Greater Limestone County for receiving the “Glenn Blackwell Person of the Year Award”.
Before becoming Sheriff Blakely served as an Alabama State Trooper and served in the Alabama National Guard.

Blakely’s behavior as sheriff has been met with scrutiny in the past. Specifically, his office currently faces a federal civil lawsuit, filed in January, alleging a veteran investigator was sexually assaulted by the office’s now-chief deputy and improperly demoted and disciplined for complaining about the incident. In February, the Limestone County Sheriff’s Office settled with the U.S. Department of Labor to pay back nearly $50,000 to employees who worked the rodeo in 2018.
This is a developing story. You can count on WHNT News 19 to bring you the very latest information both on air and online.
Posted by morgancountywhistleblower at 8/22/2019 11:11:00 AM